Here’s another one of those serendipity moments. 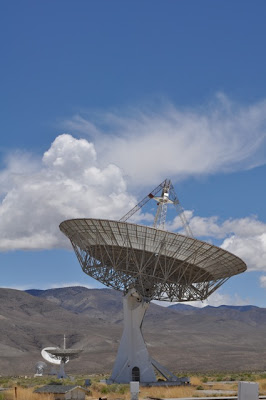 A weekend fishing trip up to the Owens Valley yielded an unexpected surprise. If you’ve ever driven up US 395 you may have noticed those large radio telescopes off to the east between Big Pine & Bishop, CA. For years I’ve wondered about those and have always wanted to get a closer look and learn more about them. What I never knew, is that 13 miles east of there, tucked up in the hills is another similar array.

Here’s the serendipitous part – the day we picked to fish the Owens River just happened to be the same day that CARMA (The Combined Array for Research in Millimeter wave Astronomy) was holding their annual Open House. We followed the signs along the highway, headed east on highway 168 past the big dishes in the valley up into the White Mountains, and found the observatory site and it’s 23 “telescopes”. 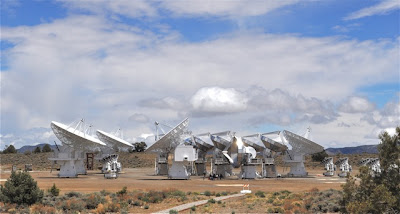 Upon arriving we were greeted by Dr. Mark Hodges from Caltech who started the tour by sharing some information about the array and some of the work being done there. While not as big as the 130 ft dishes in the valley, what these telescopes lack in size, they make up in quantity and precision. The 10 and 3.5 meter dishes here are practically perfect parabolas – the margin of error is about the width of a human hair. By using an array of telescopes they are effectively able to get the same information that could be obtained by a much larger dish. As we toured the facility, Douglas, one of the engineers explained how the racks of computers he designed process terabytes of information received from the array, filter out the noise, and combine it into one “image”. 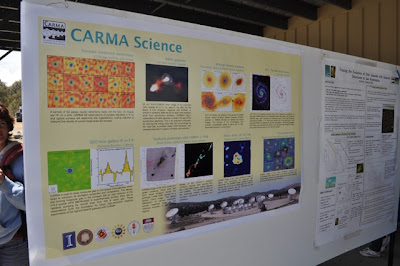 Why take a picture with radio waves?
After munching on free hot dogs provided by the CARMA staff, Eric, one of several astrophysicists on site, explained that while the Hubble Telescope provides stunning visual images, it doesn’t give us the whole picture. Radio waves provide much more information about distant stars & galaxies and help scientists determine not just what they look like, but also identify the molecules that make up these distant objects. Also, because radio waves are not affected by visible light, these telescopes can be used 24 hours a day.

What type of research is being done here?
When I asked Eric about his project, he shared that he currently has the 3.5 meter array pointed at a cluster of galaxies and hopes to use the information he gathers to prove the existence of dark matter. 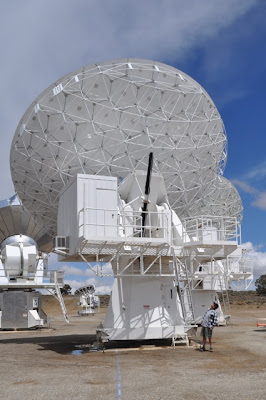 The CARMA array is funded by the National Science Foundation and is a jointly operated by Caltech, UC Berkeley, the University of Illinois, the University of Maryland, and the University of Chicago. Every 6 months, the NSF accepts research proposals and determines which ones get time to use the array. The allocation of time is a valuable thing because a single “picture” taken by the array can take take several hours. Douglas, one of the CARMA engineers, explained that to get one image, an array of telescopes captures lines of information as the Earth rotates. After about 8 hours these lines create a complete circle and the computers get to work to process the image. “It’s like the world’s slowest digital camera.”

That’s me standing next to one of the 10 meter telescopes.

For more information about CARMA, visit their site: www.mmarray.org