I hear a lot about our broken education system.  I’ve read many blogs describing the large-scale, invasive systematic changes that need to take place in order to “fix” education. These broad and overwhelming reforms are so massive and so dramatic I can’t imagine they have any hope of actually being implemented.  The change would be too drastic.  What I can imagine is a change that’s more “small-scale”. What would happen if we all agreed to change just one “little” thing? Could one simple change make any difference?

Here’s what I’m thinking. What if I decided, as a teacher, that my students would never again take another multiple choice test? What if my school or district decided to do the same thing? Could this one, simple change make a bit of difference in our student’s learning, critical thinking, and problem solving abilities? 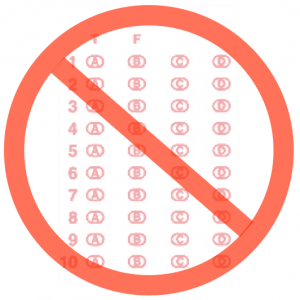 In his book, Stop Stealing Dreams, author Seth Godin tells the story of Professor Fredrick J. Kelly. In 1914 our factories were in need of workers and we needed a quick, efficient means to process and educate the throngs of immigrants coming to the US. Professor Kelly invented the multiple choice test. He described it as “a test of lower order thinking for the lower orders. ” Just a few years later however, Kelly actually disowned the test he invented saying that “it was an appropriate method to test only a tiny portion of what is actually taught and should be abandoned“.  Did we abandon it?

Last May I had the opportunity to visit a couple of schools in Finland thanks to a generous invitation from my friend and colleague, Janet English. I only had one week in Finland – enough time to get a glimpse, but not enough time to observe and discern the real beauty of the Finnish Education system. Janet had six months to observe classes and talk with teachers and students. Thankfully, she shared her thoughts and observations in her own blog and a two part article for OECD Insights.

In her article, Janet shares the following…

“Where American teachers frequently administer multiple-choice tests for assessment, Finnish teachers require students to produce something that reflects their learning.” (US Teacher Gets Finnish Lesson in Optimizing Student Potential. Part 1)

“Teachers (in Finland) monitor student learning on a continuous basis so that assessment adds to student progress rather than detracting from it…Tests are not the main method of assessment so students do not spend substantial time taking tests or reviewing for them. Multiple-choice tests are generally not given because having students pick an answer from a list is not considered the best way to assess learning.” (US Teacher Gets Finnish Lesson in Optimizing Student Potential. Part 2)

So what would happen if we stopped giving our students multiple choice tests?

What makes Professor Kelly’s test so appealing is that it is so easy to administer and  score, especially since it can be graded electronically.  Will teachers thank you for taking away this form of assessment? Probably not at first. In fact, they might actually complain that forcing them to use other types of tests will take much more time to grade because their students would have to explain what they know rather than just picking from a list. What if, as a result, teachers started designing shorter tests or tested their students less frequently?  Would that be such a bad thing?

Eventually, as an alternative, teachers might have to resort to other methods of assessing their students’ learning.  Methods that could include having students create digital projects that provide evidence of their mastery of particular concepts and standards.

I wonder…Could one simple change, make any difference?