In addition to digging into Google Maps, this summer was also an opportunity to explore the world of photography. I haven’t owned an SLR camera since my old 35mm Canon T70 died back in the early 90’s. Things have changed a lot and my new Nikon D5000 has some pretty impressive features. For those you hardcore photographers this is just an “entry level DSLR”, but for me it was a major step up from the point & shoots I’ve been using up to now. 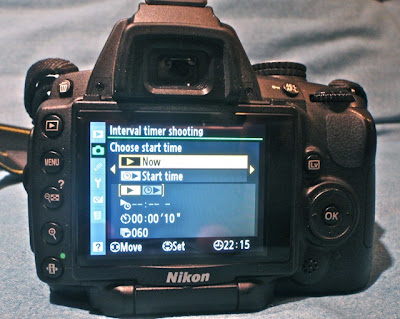 One feature I’m really enjoying is the Interval Timer feature. This allows me to set the camera to take a certain number of pictures at a specific time interval. This is a great way to capture a series of images that can be combined either inside the camera or using video editing software like iMovie, Movie Maker. For example, I was able to capture time-lapse images of storm clouds moving over Lake Powell this summer. To create the sequences below, I put the camera on a tripod and set it to take one picture every 10 seconds for about 60 frames.

The ability to shoot time-lapse has lots of creative possibilities as well as some science applications too. Things to remember:

They say a picture is worth 1000 words, but sometimes words are not enough to capture the power or summon the emotion present in a photograph. That image becomes even more powerful when you have a connection to the subject of the photo. Those of you who have seen my Digital Storytelling presentation have also heard me mention my ongoing project to scan and archive family photos. So far I’ve digitized over 1400 of them.

What I’ve found fascinating about this project is the incredible detail in many of the oldest pictures. While many of these pictures are quite small, some only an inch or two square, most are contact prints and are incredibly detailed. Scanning and enlarging these prints reveal things one might not notice looking at the original photo. 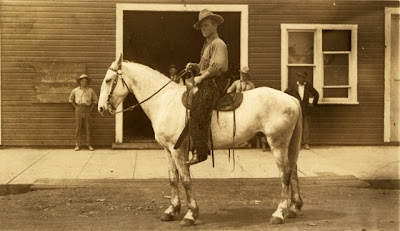 I found this to be true yesterday as I was looking at one particular photo. The picture above is one of the only photographs of my great grandfather.

According to my grandpa, who will be 97 this month, it was taken in 1914. His father was working at a sheep ranch near Yakima, Washington. He recalls early childhood memories of watching the ranchers drive the sheep down the main street of town. Looking at the photo brings back fond memories of his father. 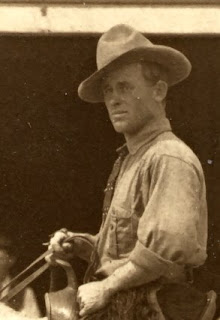 The original photo was not much bigger than a standard print, but because the photo was so detailed it was quite easy to zoom in and crop it to reveal a portrait of grandpa’s dad. Yesterday when he was handed the enlarged print I was not totally prepared for his reaction.

Grandpa joined the Navy in 1931 and his father passed away while he was stationed in in the Pacific. It’s been many years since he has looked at his father’s face and been able to see his eyes. What took just a few minutes to crop and print turned out to be quite a Father’s Day gift. Why didn’t I do this sooner?