The Museum of Modern Art in New York has set up a new place-based learning system for their exhibits. Anyone with an iPhone or iPod Touch can access audio programs for selected art works and various places around the museum. There’s even a section for kids! Visitors to the museum use the free wireless Internet to access the site and the audio. I was able to connect to the site using my wireless at home and pretend I was touring the museum. Although I’m sure the experience would be richer if I were standing in front of the actual exhibit as I listened, I found the audio clips – especially the ones recorded for kids – to be interesting and engaging even without the visuals.
If you want to check it out for yourself, visit www.moma.org/wifi/audio/. Since the site was designed for iPhones it may look a little weird but you’ll get the idea. 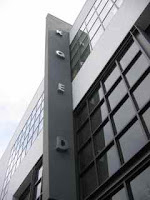 You’ve just experienced place-based learning. This weekend I had a chance to attend a workshop at KQED in San Francisco. Leslie Rule of KQED led the discussion as we shared ideas and brainstormed ways that place and space can be used to add an extra dimension to learning.

Many of us have seen how tools like Google Maps and Google Earth can connect us virtually with just about any place on the planet. Google Lit Trips takes events from books and links them to places. Imagine following the journey of the Joad family from Steinbeck’s Grapes of Wrath, or the story of gold seekers traveling from Boston to California in Sid Fleishman’s The Great Horn Spoon.

Google Maps is valuable tool for organizing data and information by location. During the California wildfires last fall KPBS used Google Maps to share place-specific information with the public and alert communities of evacuation areas and road closures.

Using Google Street-View you can virtually stand in Dealy Plaza and survey the scene where JFK was shot, look up at the 6th story window where Oswald was perched waiting for the motorcade to pass by, and click down the street to the spot where the fatal shot struck the President.

While these types of place-based learning can all be done from the comfort of your own computer screen, the real power of place-based learning happens when you step outside the classroom and into the real world. You experience the content while standing in the actual spot – seeing, hearing, smelling, and feeling it for yourself. This is where things really start to get fun. 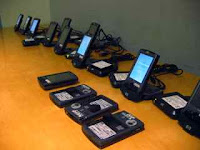 Using GPS enabled PDA’s and Mediascape software Leslie showed us how to actually create a simple version of the imagined projects described above. We pulled in a picture from Google Earth of the area just outside KQED and programmed in the longitude and latitude coordinates. Then we created zones on certain areas of the map and imported pre-recorded audio that would play when the device entered those zones. Once the “mediascape” was created it was downloaded to the PDA and we ran outside to test it out. 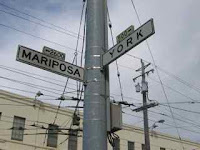 We turned on the PDA’s, waited for the GPS to acquire our position, and opened our downloaded file. The map and zones appeared on the screen we started walking. Upon entering a zone an audio clip started to play. As we stepped out of that zone the clip stopped. Errors in the GPS positioning meant that different PDA’s were triggered in different spots, but for the most part, the experiment worked!

Admittedly, the technology we used was a little glitchy and it may be a while before this type of project becomes practical. The software we used only works with Windows and Windows Mobile enabled devices. Since not many PDA’s are equipped with GPS capability, we had to use a separate bluetooth GPS unit to feed our position to the PDA’s. It worked for some and not for others, but everyone did get a vision of how powerful this type of learning could be.

Even if you don’t have all the equipment you need right now, you can still start thinking about and creating place-based content with technology you already possess. For example, you or your students could record content and upload it to your web site. That information could be downloaded to an iPod or mp3 player. Your students could use handheld GPS units or even paper maps to indicate where to play certain tracks. Then, in the future if you do get PDA’s , that recorded information would be ready-made and easily moved to a GPS enabled hand-held device.

If you have no equipment at all, you can still create an educational “treasure hunt” called an EdTrek. KQED’s Quest web site has an example and instructions for creating your own.

However you choose to implement it, the important thing to remember about place-based learning is that every place has a story. It could be geological, historical, personal, or inspirational. For your students it could be a specific place that works like a trigger to get them writing.

For those making the learning journey through those places it will give them a new perspective as they experience that place through the words of another.

NOTE: I would not have been able to attend this workshop without a generous invitation from Janet English of KOCE. Thanks Janet for the invite and for all you do to support teachers and technology in Orange County.